Margaret Stauffer began working at Washington State Bank in Washington, Iowa, when she was 21. And if anyone had told her she would still be working there after the age at which many people retire, "I wouldn't have even been able to comprehend that," she says.

But comprehension is clearly not an issue any longer, because working at the bank continues to be Margaret's reality -- more than 52 years after she started. "I love the people and I love the work -- I'm secure in how to do my job but there are enough new things to keep it interesting," she says.

Margaret and her husband, Dan -- who also continues to work -- live at Halcyon House in Washington. And as we observe National Older Workers Employment Week, it's worth noting that the Stauffers are members of a sizable group; the Bureau of Labor Statistics says that in 2020, 10.6 million people 65 and older were in the workforce.

Breaking down that number further, 26.6 percent in the 65-74 age group were working, while about 9 percent of those 75 and older continued to work. And the BLS estimates that the overall percentage of people 75 and older who remain in the workforce is expected to grow a staggering 96.5 percent by 2030.

Margaret, who is 72, says she didn't set out to set any employment-longevity records; that's simply the way things have worked out.

"I started in bookkeeping, then was a teller, did customer service -- really just about everything but being a loan officer," she says. "Now, I still do teller work, and I also arrange events for the bank and work with stockholder information as well as the Seniors Club. The work is so varied that I can't see myself ever getting bored with it, and it keeps me active."

Husband Dan, 74, who works for NAPA Auto Parts in Washington, says staying active is his primary motivation for continuing to work as well.

"I did feed-mill work and farm maintenance for 40 years, and then in 2012 I had open-heart surgery," he says. "Sitting on the couch all the time is not a good idea for me, so I knew semi-retirement -- not full retirement -- was what I should look into."

Dan says he's living the best of both worlds. "There are some other semi-retired guys working there, and I put in about 35 hours a week of work that I enjoy," he says, "I do deliveries in the mornings, and then I go back to the store and work a bit.

"And we have an agreement that I can have time off any time I want it; next week, (Margaret and I) are going to Branson. We both have a lot of freedom at this point in our careers."

Both Margaret and Dan say they feel workers their age bring attributes to their jobs that are uniquely beneficial to their employers.

"People our age have a work ethic that you don't always find nowadays; we'll go the extra mile, and we also have good people skills and care about the customer," Margaret says. Dan adds: "With some of the younger ones, it's all about 'what I want to do.' With us, we are there for the good of the business, to add to the success." 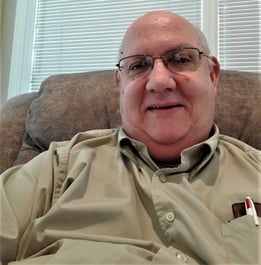 Paul Burrow, who lives at The Village in Indianola, is another older worker -- and one who would certainly agree that people who continue working after typical retirement age bring important qualities to the workplace. After teaching school in southern Iowa for 33 years, Paul changed gears and now serves as a pastor for two Methodist parishes.

"I actually started studying to be a minister while I was still teaching; I like to say I was on the 'slow boat to China' plan, because it took me 12 years," Paul says. "I truly felt God was calling into ministry, and so in my last 10 years of teaching, I was also serving a church and a Hispanic ministry.

"Then I retired for a year, and my wife and I moved here -- and here I am, involved again with my second career." He serves half-time as a pastor in both New Virginia and Medora, Iowa, working on Tuesdays and Thursdays and teaching a confirmation class in addition to his Sunday duties.

Paul says he feels his teaching career prepared him well for the ministry, and that his age and experience also allow him to be especially well-suited for his religious work.

"One thing I bring to the job that maybe someone else would not is that I myself am an older adult, so I understand better than many the situations that some of the people I minister to are in," Paul, 66, says.

"Some are isolated and lonely because their kids are living elsewhere. Some are ill -- and my wife went through a period of serious illness, so it comes naturally for me to be empathetic. When you walk in to meet with an older person and you yourself are on Medicare and have a pension, they know you have at least some understanding of their life."

Teresa Smith, a resident of Heritage House in Atlantic who also works for the community, agrees that her age enables her to bond easily with the residents she serves. Teresa, 63, is a resident assistant for Heritage House, using the skills honed during a long career in senior living to help residents with a variety of activities of daily living. 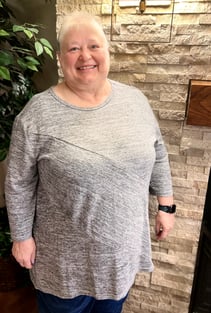 "I was doing home health for another organization when I moved to Heritage House with my husband, who was older and has since passed away," Teresa says. "My other workplace shut down, and Patsy (Woods, Heritage House's resident liaison) said they were looking for someone here. So I walked over and applied."

While Teresa is at an age at which many individuals continue to work, she's one of only a few on her campus still working, and the only one to her knowledge who actually works for the community.

"I work 30 hours a week -- three 10-hour shifts -- and I love the job and the convenience of just having to walk out of my apartment and to another part of the campus," Teresa says. "I still miss my husband, Charlie, and taking care of people who are ill kind of brings everything back and it feels good knowing I can make a difference."

She says she plans to work at least a few more years. "I love quilting and am looking forward to devoting more time to that, but this keeps me busy and I think that probably keeps me healthier," Teresa says. "I also enjoy treating the residents the way I would want to be treated. I think we older people bring extra kindness and respect to what we do."

Paul Burrow, who also says he plans to keep working for the foreseeable future, says he would advise other older adults to "not assume you're all done with your professional lives yet."

"It doesn't have to be paid employment -- I know people here at The Village who are volunteering well into their 90s -- but I would encourage anyone that if you are passionate about something and it brings you enjoyment, keep at it," he says. "I think it keeps us all healthier and happier in the long run -- and if you can get paid, even better!"

Who says the second half of your life can’t be the best half? It’s time to dream big.