“Cancer changes things, but I can still live my life!”

October is National Breast Cancer Awareness Month. In honor of team members, residents, and clients who have fought and continued to fight the most common cancer diagnosed in women worldwide, we’re featuring the personal story of a WesleyLife leader who was diagnosed this past July. Thank you, Janet, for sharing your breast-cancer journey. 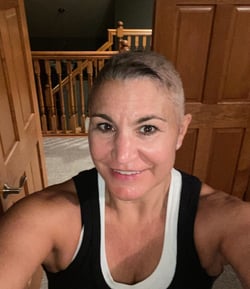 The moment Janet Simpson learned she had cancer, she was taking part in a strategy meeting of several leaders at a WesleyLife community. It will come as a surprise to no one who knows her that after taking the phone call from her physician, Janet allowed herself just a moment to compose her emotions — and then she returned to the meeting, actively participating until it was over.

“I knew that at that particular moment, there was absolutely nothing I could do to change my situation, but I could maybe add something useful to the meeting,” Janet, Vice President of Network Operations for WesleyLife, says. “I guess that is basically how I’ve chosen to handle this — to keep going and to try to contribute the way that I always have.”

The “this” Janet is referring to is triple negative breast cancer, an aggressive form that tests negative for hormone receptors and certain proteins. The absence of those elements means treatments that are often effective for other breast cancers don’t work, and doctors must employ different medications and strategies to slow the spread of and help eradicate the cancer.

About 10 percent to 20 percent of all breast cancers diagnosed in a year are triple negative, and must be combated with a combination of treatments — most often, as in Janet’s case, chemotherapy and surgery. 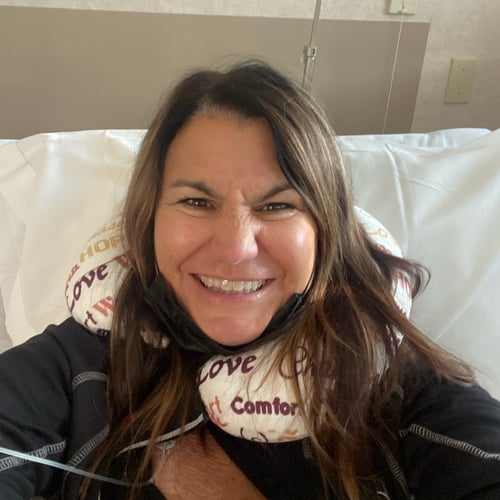 But back to that diagnosis: It couldn’t have been more surprising to Janet or to those who know her, because it would be difficult to find anyone more dedicated to health and well-being. Janet celebrated her 50th birthday last year and had been more diligent than ever in her commitment to aging healthily.

“As a leader in a health and well-being organization, ‘walking the walk’ is really important to me, but also, I’ve always wanted to continue to be healthy and in good shape to continue to do things with my family,” she says. “I’ve always been diligent about mammograms and other recommended screenings, and in fact, my yearly mammogram wasn’t even due for a couple of months when I was diagnosed.”

Janet says the timing of her diagnosis was “totally a ‘God thing.’”

“I was at the radiologist’s office for some tests for another issue I had been having, and while I was there, I thought I’d just go to the counter to make an appointment for my mammogram,” she says. “The person working there said, ‘You know, I’ll bet we could just squeeze you in right now.’

“I wish I knew her name, because as aggressive as my cancer is, her getting me in two months early could have saved my life.”

The mammogram showed a suspicious area — not altogether a surprise for Janet, as she had been told that like many women, she has dense breast tissue that often makes mammograms more difficult to read. Previous problematic areas had ended up not being cancerous, but this one proved malignant, and further testing resulted in the diagnosis of triple negative cancer, stage 1.

Staging refers to the size of a tumor and whether it has spread to lymph nodes or other organs. With a stage 1 diagnosis, Janet’s prognosis is very good — a likelihood she credits to the consistent testing that WesleyLife promotes for all team members as well as the early intervention of the Iowa Radiology scheduler and team. 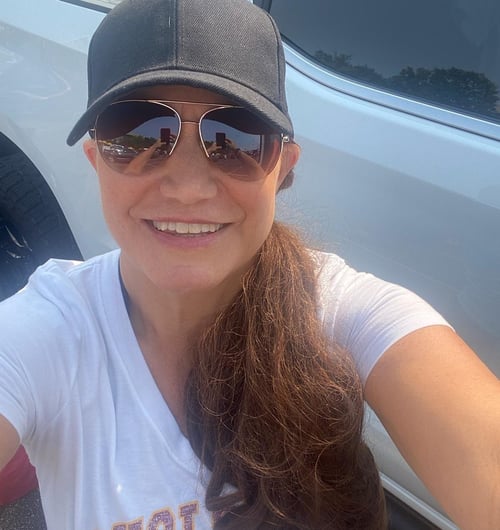 The road ahead isn’t a short one, though; Janet has weeks of chemotherapy ahead, followed by a total mastectomy — surgery to remove both breasts — and reconstruction.

Weekly hours of chemotherapy — a drug treatment that uses powerful chemicals to kill fast-growing cells — have caused Janet to lose her hair and develop other unpleasant side effects, such as painful mouth sores. But she perseveres with her eye on the prize: renewed health, and many years of activity and happiness ahead with her husband, Travis, and their two grown sons.

And she’d like to send a message to those who believe cancer changes a person fundamentally: It doesn’t. And it’s still entirely possible to live a purposeful, meaningful, and even active life while undergoing cancer treatment.

“People ask me if I’m still working, and I respond, ‘Of course — what else would I do?” Janet, who has been a leader with WesleyLife for more than 18 years, says. “It keeps my mind off what I’m going through and reminds me that I can still contribute to our organization in ways that make a difference. Some days, I feel better than others, but I think prayer and a positive mindset really help.

“And the support of everyone at WesleyLife has been phenomenal; not everyone knows about my diagnosis, but those who have known have been so understanding and caring.”

Her eyes fill when she talks about the support she has received from fellow team members, family members, friends — and total strangers.

“That has been the most surprising thing for me: the degree to which people sincerely want to help me,” she says. “I have to remind myself to allow people to help. It’s hard when you think of yourself as being capable and being the one who is used to doing the helping. Friends I have had for years have offered so much, and have been a shoulder of strength for me.

“In my family, I am the baby sister. My siblings would always joke that I would be the one to take care of them! My sisters, both of whom are old enough to be my mother, want to take care of me, so one sends me hats and flowers, and the other sends me notes of encouragement weekly. And my husband — he wishes it could be him instead of me. He has done everything to support me, even taking up cooking more! It’s been hard because sometimes I do have meltdowns, but he is right there and understands.”

She also is grateful for the online community she has found: “There are 10 of us with the same diagnosis, who all started chemo in the same month, and we are able to support one another with things that are working for us. Things like eyebrow wigs — I had no idea that such things even exist! — and how to keep neuropathy at bay during chemo.”

Janet also has gleaned comfort and education from research and support groups such as Strands of Strength, which funds the cost of wigs for cancer patients who have lost their hair to treatment, and Can Do Cancer, a non-profit organization that works to improve the lives of breast cancer patients undergoing chemotherapy in Des Moines, Ames and surrounding areas. That organization provides services such as house cleaning on chemo days, educational resources, and peer-to-peer support.

Naturally, Janet experiences "down days" and fears, but she vows not to allow cancer to define who she is. 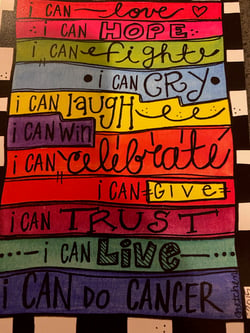 "I look at this as, God giving me an opportunity to help model the way and set the tone," she says. "He allowed me to be part of a holistic health and well-being organization that has always supported me in my efforts to be healthy and reminded me to make things like preventive screenings a priority. So I had this incredible foundation to build on and to help me be healthy going into this.

"I feel like I have a responsibility to let people know that cancer changes things, but it doesn't have to derail them. I might look different; I might have to rest on a certain day. But I can still live my life — and it's a wonderful life. I'm so grateful."

WesleyLife team members will be showing support for Janet and others who are fighting cancer by participating in the Kinship Brewing Company "Fighting Through Kinship" 5K run/walk on Sunday, October 10.

Someone you love has cancer: When you don’t know what to say
Read

Health, well-being and cancer: caring for yourself during the fight
Read