Someone you love has cancer: When you don’t know what to say

Many of us wrestle with how to react when we hear someone we care about has been diagnosed with cancer. Most people mean well when they extend their concern... but some responses don't "land" the way the person intends.

During this National Breast Cancer Awareness Month, we asked Janet Simpson to help us out by telling us what to say! Janet, Vice President of Network Operations for WesleyLife, is being treated for breast cancer, as you may have read last week.

Here, she provides us a list of things to think about in responding to the news that someone you care about is sick. (And if you’ve responded in one of the "don't say this" ways, don’t worry! We’ve all said these things and are all here to learn together.)

Don’t be irritated if you learn about the diagnosis indirectly. “Learning you have cancer is a weird thing to make an announcement about,” Janet says. “In my case, I needed time to digest the information, so I didn’t say much at first. I even told some people at work, ‘Yes, something is going on, but I’m not ready to share about it quite yet.’ If you’re not told by the person right away, don’t let yourself feel offended. That person probably just needs some time to sit with the news.”

Try to avoid platitudes. “So many people have said, ‘You’re so strong,’ and I really appreciate that – but everyone has things they’re facing in their lives that they have to be strong about,” Janet says. “Just like all people, I have days when I don’t feel strong at all. And really, what choice do I have? I can give up, or I can keep going. Of course, I choose to keep going, but I am not Superwoman!”

As Nike says… Just do it. “It’s hard for people to say they need help, and chances are if you ask, I’m not going to be able to give you anything specific,” Janet says. “I am so appreciative when someone just sends a note or a text, or even drops something on the front step. Like my mother always said, ‘It is truly the thought that counts,’ and that is never more true than when someone has cancer. If you want to do something kind, don’t wait for permission.”

Don’t assume the person has fundamentally changed. “I hear a lot of, ‘Are you still working?’ with emphasis on the word ‘still,’” Janet says. “To my way of thinking: What else would I do? I love that I can contribute in a way that also helps take my mind off my cancer. It makes me feel really good when people just treat me the same way they always have. I know there are individuals who can’t work, or choose not to, and I applaud each individual’s decision. But for me, I love what I do, and the good feelings I get are important to my journey. I also want to continue to give back to the organization as I can.”

Avoid saying, “You don’t look sick; you look great!” Everyone responds differently to treatment, Janet notes. “Even though you might look good, you could feel terrible,” she says. “Often, looking good on the outside helps you feel a little better on the inside.” Janet has lost her hair, but someone else in her online support group has not; some people lose weight and others gain. “Chances are people you know who are being treated for cancer look the same way they always have,” she says.

DO say, “I care about you.” Other great alternatives are: “I’m sorry you are going through this,” “‘I’m thinking of you,” “I’m praying for you,” “I am so sorry this has happened to you,” and “I am here to help,” Janet says. Also, she adds, it’s perfectly all right to ask, “What are you and your doctor planning to do?”

“Knowing others are taking time to pray or just wish me well is really humbling and just makes me feel grateful,” Janet says. “Those are the things that get me through the rougher days. I know it’s impossible to understand what someone with cancer is going through, and I have also had times I haven’t known what to say to others; just let them know you’re here and you care, and that will make a difference!”

Pictured above: Janet in a "Simpson Strong" t-shirt designed by Scott Benson, a friend since college days; 1,800 high-schoolers Scott works with in South Dakota are wearing the shirts to cheer Janet on from afar! "Making these shirts was a big deal, and I cried because I was so grateful," Janet says. "He didn't ask -- he just did it -- and I was amazed and humbled."

Pictured below: Gifts Janet has been given by generous friends and family members since she began treatment in August. "If anyone had asked if I needed any of those things, I would have said no because I wouldn't have wanted to inconvenience them -- but because these friends and relatives chose to 'just do it,' they brightened my day in ways you could never imagine," Janet says. 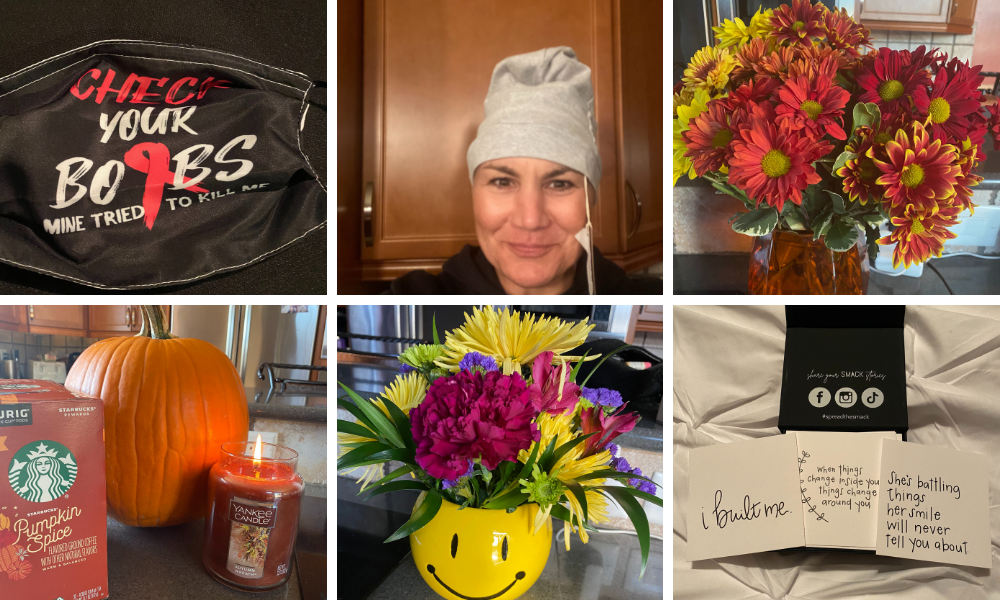 Not Just Lip Service: What Mission Means to the People Who Serve You
Read

How person-directed living can help someone you love
Read

As cancer journey continues: "Be grateful for your nose hair."
Read
See all Articles