My sister, my neighbor: Siblings enjoy togetherness at Brio 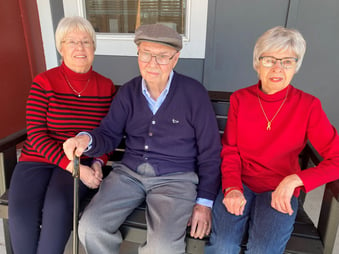 For some sibling groups, seeing one another on birthdays and holidays is plenty. For the Burns sisters and brother, though, one of the best parts of growing older is living in close proximity – under the same roof as, and just down the hall from, their siblings and closest friends.

Betty Burns Empey (at right in photo above), Karen Burns Pittman, and Jerry Burns all live at Brio -- Betty and Jerry just two doors apart, in fact. The "girls" heard about Brio while it was being built; Karen and her husband, who had been living in Urbandale, didn't waste any time in joining the waiting list for a two-bedroom independent living apartment, and in short order, Karen convinced her sister and brother to plan to join her at the community.

"She told me I had to move!" Betty, the middle child who had been living on the north side of Des Moines, says with a laugh. "I had been living in a house with our oldest brother, and when he passed away, I realized that the upkeep of a house was going to be very hard for me on my own."

Betty, for whom a one-bedroom apartment was immediately available, moved in first. Brother Jerry, the eldest living sibling, who also was living in a home in Des Moines, was a harder sell.  "He didn't want to give up the independence of his house -- his garage and all that -- but he came to realize it would be a good idea for us all to live close to one another," "baby" of the family Karen recalls.

Jerry and his wife moved in next, followed by Karen and her husband. Jerry's wife passed away shortly after the couple moved into their assisted living apartment, and living so close to younger sister Betty has provided both siblings with an enhanced sense of comfort, Karen says.

"If Jerry needs anything, Betty is literally right there," she says. "I think it probably makes us all worry less that anything could go wrong, with one another so handy."

The trio concedes their parents, both of whom are deceased, would be happy about and proud of their living arrangement. But they probably would not be surprised by it, Karen says.

"I'm not saying we're perfect by any means, but we've always gotten along," Karen says, adding she can't recall a time when she's argued with one of her siblings. She says although the three don't spend all their time together, they enjoy attending events at Brio as a group -- with Karen's husband in tow, of course.

Betty says because the siblings, natives of southern Iowa, grew up on a farm, "we only had each other, so we had to be friends." (Coincidentally, all four siblings worked as teachers, with Jerry also becoming a school administrator.)

"During the school year, we had our little playmates, but especially in the summer, if we hadn't had each other, we would have been really bored!" she recalls. "Our brothers worked on the farm and my sister and I helped in the house, and the expectation, I think, was that we would always be good to each other."

When asked for any advice they'd provide to other sibling groups who are considering living together in a community, the three looked at one another and smiled.

"I'd say just do it!" Karen says, with Betty chiming in, "There's no downside!"

Step-Challenge Champ: 'This is My Mount Everest'
Read

As cancer journey continues: "Be grateful for your nose hair."
Read
See all Articles