"Let go of your plans and embrace the ones that are waiting for you." 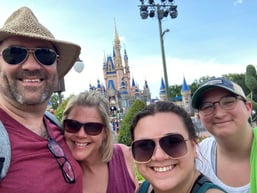 When Matt Garcia woke up one day in March 2021, he couldn't have imagined that his afternoon would be spent seized with worry, looking up the definition of "pansexual" and certain the world would mistreat his daughter.

"To say we were surprised is an understatement," Matt, Regional Director of Operations for WesleyLife, says of his and wife Amy's reaction to their daughter's announcement earlier that day that she was a member of the LGBTQ community, and that she was in love with a woman.

Megan Garcia, now 22, certainly was not alone last year in proclaiming an LGBTQ orientation; according to the research firm Gallup, Inc., more than 7 percent of U.S. adults self-identified as lesbian, gay, bisexual, transgender or something other than heterosexual in 2021. That percentage represented an increase of nearly 100 percent over the percentage reported in 2012, when Gallup began measured sexual orientation.

"It sounds so foolish to say, 'Wait, she dated boys, so how could we have known?'" Matt says. "Once we became educated about different orientations under the LGBTQ umbrella, we understood Megan doesn't base her love for someone on what gender that person happens to be.

"For our daughter and for many others, it's about the emotional attachment, regardless of gender."

"A lot of processing" -- and worry

Matt was raised in a conservative family of Irish-American and Puerto Rican heritage. After Megan shared her news, neither he nor Amy questioned their love for and acceptance of their daughter, but they worried about how their family members and others close to them would react.

"As a parent, of course I didn't want to see my child wounded in any way," Matt recalls. "I know now that I was foolish to have worried at all, but in the back of my mind, I feared she would be rejected. So Amy and I simply 'locked down' with the news for a while."

He said the subsequent few weeks were filled with "a lot of processing -- wondering why we didn't see it coming. Not wondering what we could have done to prevent it, but wondering if perhaps she could have come to us sooner and we could have been there for her, and feeling sad that she had experienced worry over telling us."

Once Matt and Amy had "talked and processed and talked and processed some more," they got to a point at which they felt comfortable sharing Megan's news with those close to them. Matt reached out -- with Megan's permission -- to one of his siblings who also has an LGBTQ adult child.

Her response, Matt recalls, gave him comfort and pointed him on a road to thinking differently about the news.

"My sister said, 'Let go of the plans you had for Megan and embrace the ones that are waiting for you,'" Matt says. "That reminded me that the plans are hers to make, not mine.

"Amy and I have an easy job: to love and support our child. We always knew that was what we would do, but my sister's words put things back in perspective."

In addition to reading and learning all they could about pansexuality -- defined as sexual, romantic, or emotional attraction to a person regardless of their sex or gender identity -- Matt and Amy knew it was fundamentally important to Megan that they get to know her partner, Alyssa. The two women had met in college, and Matt and Amy had become aware of Alyssa the previous year.

"In 2020, Megan came home from school and lived in our basement for a couple of weeks because she had COVID," Matt says. "While she was convalescing, she received a care package from a friend. When it came to the door, I was so taken with the care that had obviously gone into it that I took a picture of the package and thought, wow, that person must really be a good friend to Megan."

Matt recalls that in his first months of processing Megan's news, he mourned the fact that he wasn't going to have a son-in-law; he had nothing against Alyssa, but because Megan is an only child, "I knew I had one shot at someone to watch sports with and play golf with, and I was disappointed."

"Looking back, that reaction was so incredibly sexist, but the situation took care of itself and I was humbled quite nicely," Matt says. "One day, Megan called and said, 'Alyssa is an incredible golfer; you guys should play.' And we did, and to make a long story short, she's a great golfer and an incredible person. We have that bond and I am really grateful for it."

Matt says as the months have passed, Alyssa has become a much-loved member of the family; she and Megan are engaged to be married next year, and she accompanied the Garcias to Disneyworld recently to celebrate Megan's college graduation, and hers as well.

The couple have also developed what Matt describes as a "very sweet" relationship with Matt's Titi ("Aunt") Mary, who is in her 70s and gay; "she didn't have children or grandchildren, so she has taken them under her wing, and it's meaningful for me to watch that develop," he says.

While Matt is quick to note he doesn't consider himself an expert, he offers this advice to other parents who are processing the news that their children are part of the LGBTQ community:

"When it comes down to it, as a parent, your number-one wish is for your child to be happy and connect with their purpose -- and, if they're fortunate, to have a partner that helps them do that," he says. "If they've found that, embrace it. Alyssa is very good for Megan, and vice versa.

"And as far as your own processing -- lean into your relationships with your family and friends rather than withhold and hide. Allow them to be there for you as you're processing and getting used to your plans needing to change. Chances are they won't let you down."