When Janet Heinicke found herself on the floor for 24 hours, unable to move because she’d fractured her hip, she realized if she intended to continue to live in her home, she was going to need some assistance.

Thankfully, she knew where to look for help. 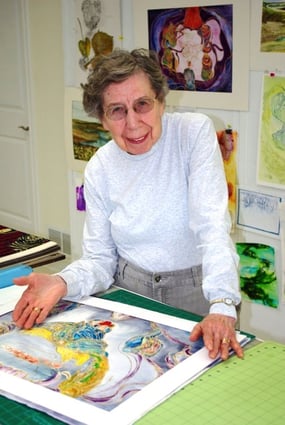 Janet lives in a townhome on the campus of The Village in Indianola. A longtime educator and artist, she had been working in her basement studio when she decided to take a break for a bite to eat. As she was finishing in the kitchen and preparing to go back downstairs, she fell.

“I thought, ‘You broke your leg, you dummy,’” Janet says. “Unfortunately, my medical-alert device was in the bedroom, and I couldn’t reach my phone. I tried scooting around to get to it, but that didn’t work. So I just stayed where I was until someone came to visit the next day and saw me through the windows.”

Janet had surgery that week; after a few days in the hospital, she returned to The Village and spent some time in short-term rehabilitation. But when it came time to be released, she knew she wasn’t quite ready to be on her own. On the other hand, she couldn’t wait to be back in her home.

“Before my husband passed away, we had called on WesleyLife At Home to provide the services we required for him, and the assistance they gave us was exactly what we needed,” Janet says. “I thought it would make sense to arrange that again. I have a large family of adult children, but everyone lives elsewhere and no one is a position to be available. Plus, my independence is important to me.”

The Village helped Janet arrange services, and team members from WesleyLife At Home began visiting Janet at home several times a week. The Home Health team helped with medically related services; the At-Home Services team assisted with light housekeeping, food preparation, and “being my legs when I needed them to be,” she says.

“In years past, families lived together and helped one another when someone had a health issue; services like this one can take the place of that kind of situation,” Janet says. “I saw so much value in the help WesleyLife provided that even though I’m basically recovered now, I still have At-Home Services come in a few hours a week.”

Janet says she’s certain her recovery would have been delayed if she had not been able to recuperate at home.

“There’s the economic value, which is considerable; having care in my home was very reasonable for me," she says. "However, it’s more than that. There was the comfort aspect. Now, having assistance enables me to not only continue my recovery, but to maintain the kind of living environment that comforts and satisfies me. My home is my anchor.”

Team member goes above and beyond, and is honored in return - WesleyLife
Read